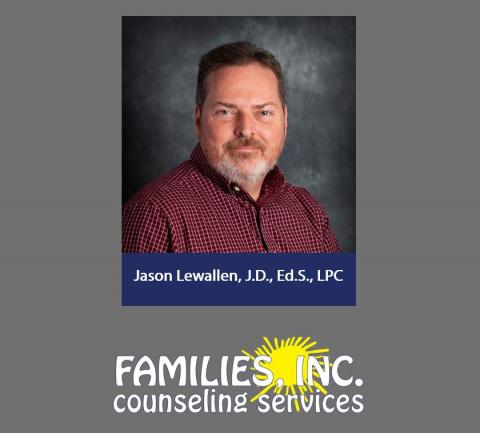 Jason Lewallen was named Jonesboro Outpatient's Clinical Supervisor in December, 2022. Jason is a Licensed Professional Counselor and he provided direct therapeutic services since 2015 through Families, Inc.’s Jonesboro Outpatient and School-based. While in that role, he also supervised Masters Level Interns.

Jason received his bachelors in Psychology and his education specialist degree in Clinical Mental Health Counseling from Arkansas State University. In between those educational stents he received his Juris Doctorate from the University of Arkansas School of Law and worked in the field of law from 1999 – 2014.

Jason is a 2012 graduate of the Jonesboro Chamber of Commerce Leadership Jonesboro and is an Adjunct Professor at Arkansas State University in the Clinical Mental Health Counseling program.  He and his wife, Susan, have two children, Katherine and Elizabeth.  He enjoys spending time with his family, time in the outdoors, woodworking, gardening, and cooking.