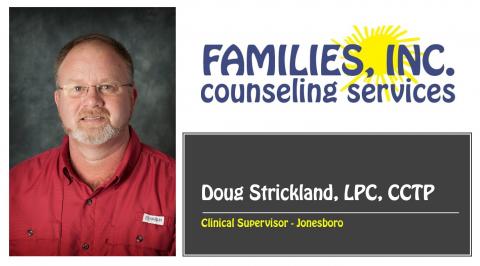 We are happy to welcome Doug Strickland, LPC, CCTP to the family!

Doug has an interesting path to his career in mental health. After returning home from Iraq in 2007 where he was an Army Squad Leader, he became passionate in understanding the debilitating effects of mental illness and assisting others in reaching their highest quality of life. He graduated in 2014 with an (Ed.S.) Degree of Psychology and Counseling at Arkansas State University where he also received a Bachelor of Science Degree in Psychology with a Minor in Business Management in 2012.

Since that time, he has served as a therapist and paraprofessional and most recently as the MidSouth Clinic Coordinator in Paragould, AR. Additional trainings include a certification as a Clinical Trauma Professional (CCTP), Truama Focused Cognitive Behavioral Therapy (TF-CBT) and EMDR-Eye Movement Desensitization and Reprocessing.

He served in the Arkansas Army National Guard for twenty-two years and was deployed to Iraq in 2006 with the 875th Engineer Battalion. Prior to combat, he worked at Hytrol Conveyors as a Production Leader for 11 years.

Life is Meant to be Enjoyed